Caught an interesting piece listening to Weekend Woman’s Hour on Saturday about blogging  in Iran, which has the third largest number of bloggers in the world. 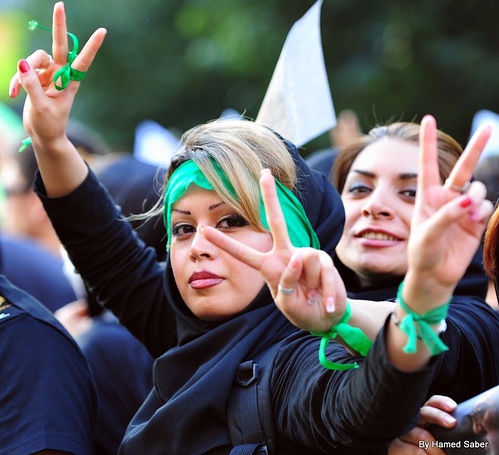 Jane Garvey was talking to Fatemeh Shams and Annabelle Sreberny co-author of Blogistan: The Internet and Politics in Iran about blogging.

With an estimated 70,000 active bloggers in the country, blogs were the most significant social media during the unrest that followed the disputed electioncne 2009, despite the fact that much of the media focus was on the use of Twitter.

Annabelle Sreberny said that blogging was important in reestablishing trust between Iranian people:

If you can’t do face to face politics you really don’t know what people really think: Iranians used to talk in the bread queue, in the taxi, there was trust. Lately, particularly under this government, that trust has been broken. So the dynamics of the election, with public rallies with women, the wife of Mir Hussein Mousavi, Zahra Rahnavard as a powerful figure in the election, women going into football stadiums, a space from which they were barred before in terms of watching games, wearing green, just women out in public creating a public, so that other people can see where other people are. You begin then to sense there is a movement out there, we are not isolated, we have ideas in common.

Fatemeh Shams, whose husband was detained last June when the couple were visiting Iran, explained how she had started blogging when she was looking for a space to publish her poems, but she soon realised that it gave her the opportunity to share the things that she “couldn’t say aloud”.

“Everything changed after the election,” she said.

I was one of thousands of Iranian women who started blogging, most of the wives of the prisoners started blogging because they didn’t have the chance to talk to and to express their concerns about their husbands, their dear ones who were imprisoned.

I wasn’t sure during the time that he was in prison, I was hesitant most of the time because I was pushed by many people to stop blogging and not to write about him. But I kept writing and I continued until his release and it was amazing because when he came out he told me ‘the main reason for my release was the threat that you made through your blogging and posts you updated on your blog.

I was amazed by the amount of people actually coming to my blog after my husband’s imprisonment and even afterwards, expressing their thoughts and sympathising. I didn’t know the vast majority of them.
I’ve been following women’s blogs in Iran for about seven years now.. and after the election what happened on the political scene gave the chance to women to express their ideas more freely and openly than before. So now, for instance there are some blogs that are significantly affecting the blogosphere in the Iranian community. They talk about divorce, for instance, and also about sexual relationships that is completely considered a taboo.

But now it’s getting harder because the government has realised how important and powerful the Iranian women have become in the virtual world and now they block more and more blogs every day.