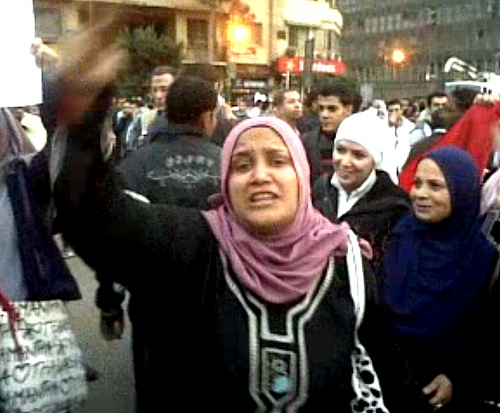 Judging by the majority of images on TV it would seem that the streets of Egypt are full of men, with only a small number of women taking part in the protests.

Not so, according to a number of commentators.women are playing a bigger role than usual in the protests – with numbers said to be between 20 and 50 per cent, writes Jenna Krajeski

I’ve been asking myself what role women have played in the uprisings and what recent events mean for women for the past few days..

On Global Voices Gina cardenas has a round up of what “bloggers and citizens spreading information on social networking sites” are saying about the part played by women in the protests:

The massive number of protesters taking to the streets demanding government reforms has created a tipping point for women’s civic participation in a country where it is risky and dangerous to demonstrate against the authorities. Their efforts have had limited coverage in the mainstream media.

To redress this imbalance, a Facebook group, Women of Egypt, set up by Barcelona-based Leil-Zahra Mortada is collecting images of women in the protests for “everyone who has been asking where the women of Egypt are”.

We are trying to compile all the photos with Egyptian women in them. A homage to all those women out there fighting, and whose voices and faces are hidden from the public eye!

Megan Kearns in her post Taking It to the Streets: Egyptian Women Protest the Government Alongside the Men Yet Few Images of Women asks why the media is not showing images of women:

Egyptian civilians say they won’t stop protesting until President Mubarak steps down from office. And women in Egypt will be advocating for justice too. But when the media doesn’t show images of women involved, it appears as if they aren’t entrenched in rallying revolutions; they are written out of history. Women don’t merely sit on the sidelines, having their husbands, brothers, fathers and sons wage battle for them. Women confront corruption, fighting for freedom for their country and themselves.