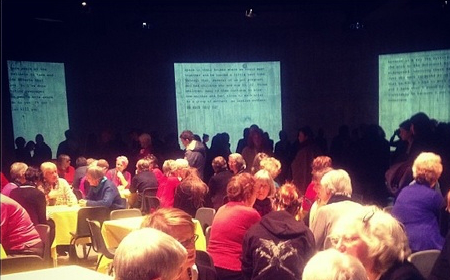 Earlier this month Tate Modern hosted Silver Action, an interactive concept created by artist Suzanne Lacey to get older female activists to share their stories via digital platforms. Despite attracting over 400 women, an impressive feat, less than a sprinkling were from black and minority ethnic and working class backgrounds. Julie Tomlin, who was there, explains why this under-representation can no longer be ignored.

There was much to celebrate at Silver Action at Tate Modern on Sunday 3 February, when more than 400 women activists over the age of 60 were brought together by artist Suzanne Lacey to share their stories.

Sitting at tables in groups of four, the women discussed the campaigns of the 1960s and 1970s they had initiated and joined, such as abortion rights, the right to live without threat of violence, for decent housing and fair wages, and for nuclear disarmament.

During the course of the afternoon, visitors were free to listen in on the conversations, which were also transmitted via social media.

While our traditional media seem intent on excluding older women, it was remarkable to see how the visitors and the younger women, tweeting their words, were inspired both by these older women’s stories and spirit.

As @profLizKelly commented on Twitter: “#Silveraction is like being in a bath of women’s words and voices, you have to just let yourself soak it up.”

But if Lacey’s performance art demonstrated the value of hearing and recording women’s stories, it also reflected some of the issues about their representation, and the dominance of white middle class women in particular – that we have discussed before on this blog.

One woman who took part, Lili Sanchez, says it was “amazing” to sit and “discuss the politics of our lives from trade unions to sexual unions, not party politics or the big headline topics, but politics of everyday lives”.

Young women were invited to share the older women’s stories on social media during the event.

That said Sanchez is concerned that the media coverage of the event focused on “the big stuff such as demos and strikes” instead of the everyday struggles of working class women to bring equality into the home. She is also resistant to the idea that women are a “homogenous mass” because they share the same age.

“I felt angry when I heard people at the workshop [before the event] say ‘us older women’. I felt it would be another crowd of women where working class women would be a rare presence. From my observation [on the day] I was right,” she says.

Like Sanchez, Benedita Whitehouse, who moved to London from Brazil in the 1970s, also relished the opportunity to sit and discuss politics. But like Sanchez, she is concerned that there were relatively few black women among the 400 participants.

Both Whitehouse and Sanchez agree that the cost of travelling to the Tate Modern and a seemingly heavy reliance on the internet and email to reach women activists may have been a barrier to many women who might otherwise have participated.

Listening to the discussions at the tables it was apparent that the web is valued by older women. They were keen to continue their engagement with radical ideas and find information they couldn’t find in the mainstream media.

What is also clear is how women who didn’t have the skills to use digital technology, or simply couldn’t afford it, felt removed from today’s activists who, through their blogs and social media, were able to find like-minded people and campaign on issues they were passionate about.

In an age where so much activism is taking place online, and where our digital profile is often crucial to our being known and reached by others, there is still a lot of thinking to be done to avoid reinforcing online the exclusion that exists in the physical world.

This article first appeared at: WordsofColour.co.uk